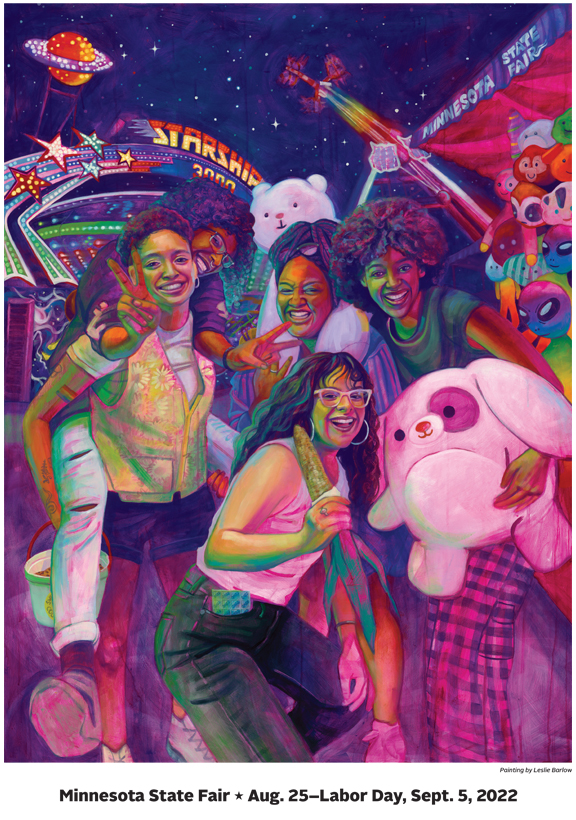 The 2022 Minnesota State Fair Official Commemorative Art by Minneapolis artist Leslie Barlow was unveiled at the State Fairgrounds on Thursday, June 9. Surrounded by State Fair enthusiasts, Barlow presented her joyful and vibrant oil painting publicly for the first time. Her 3-foot-by-4-foot original painting will be on display in the Fine Arts Center during the 2022 Great Minnesota Get-Together.

The original artwork is a cosmic and youthful look at the fair. “I wanted to communicate the energy, excitement and joy that the fair brings me,” said Barlow. “The fair often feels otherworldly, especially near the midway, with all the sounds, laughter, bright lights and activity. I wanted my work to represent that.”

“I often paint people of color and love our skin tones to be really vibrant and beautiful,” she said. “In this piece, you also see the neon lights from the midway reflected in the faces, communicating how bright and lively the fair is at night.”

Although the painting presents one cohesive image, it is actually a collage. “I wanted the painting to look like a snapshot, but in reality, each element is from a separate image. For example the people are from one photo and each of the rides are separate too,” said Barlow.

She is primarily an oil painter, and through her work she explores complex social issues like race, multiculturalism, “otherness,” representation and identity. She lives and works in Minneapolis and has an art studio in the Northrup King Building in Northeast Minneapolis.

Barlow is a recipient of the 2021 Jerome Hill Artist Fellowship, 2019 McKnight Visual Artist Fellowship, the 20/20 Artist Fellowship from Springboard for the Arts, and four Minnesota State Arts Board grants between 2016 and 2021. In 2018, she received the Minnesota Museum of American Art Purchase Award in the juried Minnesota State Fair Fine Arts Exhibition. In 2011 she earned her BFA from the University of Wisconsin-Stout and later her MFA in 2016 from the Minneapolis College of Art and Design. In addition to her studio practice, Barlow has taught at the University of Minnesota, Metropolitan State University and Carleton College. She also supports emerging artists at Public Functionary as director of PF Studios, is a part of the Creatives After Curfew mural collective, and is a seven-year volunteer for the organization MidWest Mixed. In 2021, she was a participating artist in the Minnesota State Fair’s Joyful World Mural Park project at the fairgrounds as one of 12 local artists painting large-scale artworks that reflect the world they want to live in. She is represented by Bockley Gallery.

The commemorative poster and a limited number of signed prints featuring the art are now available for purchase; see links on this page. Posters will also be available during the fair at State FairWear Gift Shops, Fine Arts Center, J.V. Bailey House and Bargain Book and State Fair Poster Carts around the fairgrounds. Proceeds will support the Minnesota State Fair Foundation 501(c)(3) mission to preserve and improve State Fair buildings, fairgrounds and educational programs. 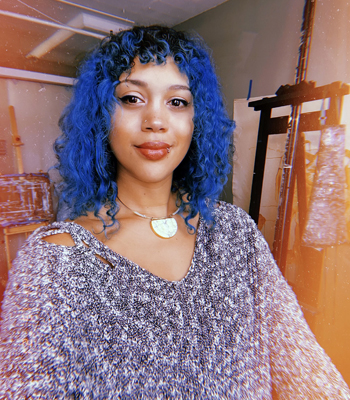 Purchase a 2022 poster: The 2022 poster is on sale now online. These posters will also be available at State FairWear Gift Shops and Bargain Book & State Fair Poster Carts during the 2022 State Fair. Posters are 18”x 24”.