Q & A with Kevin Cannon

How would you describe your type of art?

I’m a cartoon cartographer, which is to say the maps I make are very playful and fun, but not always accurate. I discourage anyone from using my maps for actual navigation!

Please take us through the process of creating the State Fair poster.

I love talking shop, so this answer will probably be more than you want to hear!

The most important step was coming up with a concept. It was challenging to not get overwhelmed with the idea that whatever I created would be forever linked to works by amazing artists who created commemorative art for previous State Fairs, including Mary GrandPré, Nancy Carlson and Adam Turman. I initially felt pressure to make something that everyone would like, which is frankly impossible. In the end, I created something that I, as a fair visitor, would want to hang on my wall.

The next step was research, which was especially important since I was creating a fairly literal portrait of the fairgrounds. I spent as much time as I could attending the 2019 Minnesota State Fair, taking photos and soaking in the sights. Later, I also relied on the State Fair’s photo archive for reference. The fair has some amazing drone footage that proved to be particularly helpful as a resource for the type of overhead images that I was drawing.

The hardest part of the process was figuring out how to physically create the painting. Normally with large maps, I’ll draw everything in sections on small pieces of paper, scan them into the computer, and then digitally stitch them together in Photoshop. This project, however, needed to be one huge painting, and I didn’t have the space in my studio to lay it out flat. Ultimately, I rigged up a mini-drafting table that allowed the painting to bend and curve out in the same way that you might feed a piece of paper into a typewriter. I used this system for the penciling and inking stages, but for the watercolor painting, I placed the painting flat on my desk and ended up painting most of the top part of the painting upside down.

You originally created this piece for the 2020 State Fair. What changes did you make to adapt the poster for 2021?

The original artwork was designed to represent a timeless view of the State Fair and required only slight modifications for use in 2021. The biggest change was adding a streamer with the 2021 State Fair tagline “Great Minnesota Get-Back-Together.” That banner is really the only nod to the crazy year we’ve had.

How many hours did you put into making the original piece, and how many additional hours did it take to modify the poster for 2021?

I get this question a lot, especially with regards to any big, detailed project like the State Fair painting. The truth is I don’t know how many hours were involved. Hundreds, probably. The project as a whole took approximately one year. During that time, I spent several weeks on rough art and research, and then probably two solid months penciling, inking and painting. Later, the 2021 additions were minimal and only took a few hours.

Any fun facts to share—such as how many faces are there? Any ‘Easter eggs’ hidden in the artwork?

In keeping with the “timeless” theme of the painting, I didn’t want to go wild with easter eggs. I placed some family members in various spots around the map, and I also hid a secret message throughout the image. Mostly I tried to draw as many people as possible enjoying the fair in the millions of little ways that each of us experience the fair differently. And although I never counted the number of faces in this poster, that might be a fun activity for someone else to try.

How do you hope people react to the poster?

I hope people get a copy of the poster to take home and explore, especially when the days start getting shorter and colder and the next fair seems far away. I hope people spend a lot of time with this illustration, that it’s not something they just glance at and look away. Again, what I love about maps is that you can enter them at any point, jumping around on a whim or wandering at your own pace. If I’ve done my job right, then there is enough detail to keep viewers interested, and they’ll discover something new every time they take a look.

How did you become interested in creating cartoon maps?

Cartoon maps have always fascinated me, especially amusement park maps and the kinds of maps you find in the endpapers of travel and adventure books. Unlike a typical atlas map, cartoon maps exaggerate and embellish certain features in order to tell a story. What I love most about these maps is that the story they tell is nonlinear — unlike a book that has a beginning and end, you can jump into a map at any point and explore as much as you want, in any direction you want. That’s the same feeling I get any time I’m at the State Fair. I love drifting from one attraction to the next without any real goal in mind, not really knowing what I’ll discover around the next corner.

When did you first realize that you wanted to be an artist?

I’ve been drawing nonstop since before I can remember. In preschool, I would draw elaborate pictures of pirates, clipper ships and sharks and ask my teachers to write down little narrations in the corner of the picture. Even back then, I was in love with the idea of stories and drawings working hand-in-hand, so it was a pretty easy decision to become a cartoonist. 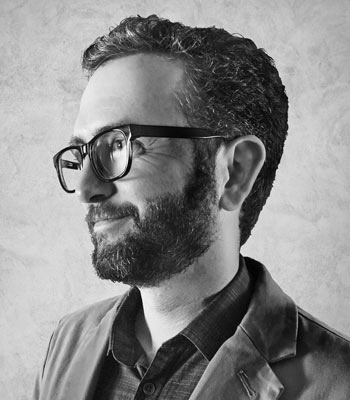